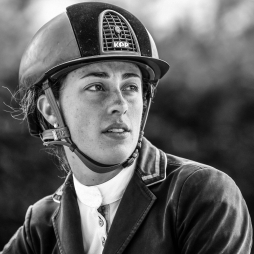 Born in Turin (Italy) on June 15th 1992, she started riding at the age of 10 during a summer camp. She jumped many Nation’s Cups for Italy as a Junior, Young Rider and Senior, scoring many wins.

Lumiere was the horse that launched her on the international scene, helping her win two incredible medals in her first European Championship: an Individual Bronze Medal and Team Silver Medal at the Junior Europeans in Hoffddorp in 2009. The two were on  the Italian team for the following three years taking part in another Junior European and two Young Riders European Championships as well as jumping many Nations Cups. Lumiere is now retired and enjoys life at Giacomo’s barn in Italy.

Along with Lumiere, Valentina could count on other two very good horses: Vayana and Power de Guldenboom.

Vayana arrived in her stable at the age of 7 and had jumped only a few 125cm classes after having had 3 foals. Power, instead, arrived as a 5 years old and has developed entirely under her saddle. Vayana was retired from the sport in March 2017 after a problem created during surgery and now is focusing on breeding at the FZ stable owned by Franca Zanetti near Treviso. Power is still going strong and at the age of 16 he recently won a good Grand Prix class in Italy.

Currently, Valentina has two super mares that are starting to shine on the international scene: Favinia and Lilli Fee FZ.

Favinia is a super 9 years old mare that already jumped 3* Grand Prix classes with great results. Small and feisty she is a real trier. Despite her size she has a lot of scope and is extremely careful and competitive in big classes.

Lilli Fee is an 8 years old mare who recently jumped her first 150cm Longines Ranking Class and is starting to produce many clears in the 145 LR classes. All the scope you hope for, she is big but very easy to ride. Very careful too, she has the potential to jump all the big Grand Prix’s around the world.

Valentina is very focused on University too, and after graduating from her bachelor in December 2015 in Translation at the University of Turin, she did a 2 year masters program in International Tourism in Lugano (Switzerland) at the Università della Svizzera Italiana.