As the year comes to an end we are already looking forward to 2018.

This years we have had two beautiful new baby stallions. The first one was born in April by Marcus Ehning’s famous Comme il Faut (Cornet Obolensky x Ramiro), who is son of the very famous mare Ratina Z, Individual and Team Gold Medal winner at the Olympic Games is Atlanta 1996, Team and European Champion in 1997 and Team Gold Medal winner at the World Equestrian Games in 1994 with Ludger and previously Individual Silver Medal Winner at the Olympic Games in Barcelona in 1992 as well as Team Gold with Piet Raijmakers. Cornet Obolensky needs no presentation, he has been one of the top breeding stallions in the world for the past 10 years. The mother of our baby stallion in Coral della Verdina, Italian bred mare by Corrado I and Lavaletto, who jumped up to 150cm classes already when she was 8 years old, but due to an injury, had to stop jumping at the age of 9. She was ridden by Giacomo.

The second baby was born in July and is a son of Dominator Z, a very good jumping 7 year old horse ridden by Judy Ann Melchior, bred at Zangersheide. He is a Diamant de Semilly son out of a Cassini I mare and seems to have all the scope to jump really big classes. The mother of our stallion is Roxy 74 (ex O.Cinderella’s Colorado) was a very good mare that jumped 160cm classes with her first rider Peter Bulthuis and then was the first grand prix mare for Giacomo. Her father is the famous Indorado out of a Saluut mare.

We have very high hopes for both babies… 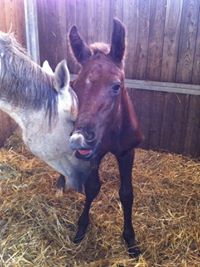